This is the record of a little-known national story which played out especially strongly in the South West.

An enormous number of American soldiers were stationed in Somerset and Devon during the preparations for D-Day. The soldiers were black and white, and both seem generally to have received a warm welcome – in some cases despite the efforts of the US Army to segregate the black troops – although there were also, sadly, some terrible instances of racism.

During and shortly after the war a number of children were born to white English mothers and black US Army fathers. Nationally it is thought there were about 2,000 such children, many of whom referred to themselves as the ‘brown babies’. Most were illegitimate and many ended up in children’s homes. Some parents applied for permission to marry but were refused by the father’s white commanding officers: in some parts of the USA mixed-race marriages were illegal and so it was often impossible for the mother to move with the child to America and for the couple to marry there.

‘Brown babies’ were also born in other parts of the country as well as in Germany. But in Somerset the children were particularly remembered because from birth to the age of five many were sent to the same children’s home, Holnicote House near Porlock. By 1948, there were 45 ‘brown babies’ known to be living in care in Somerset, about half of whom were at Holnicote. The children, when interviewed in later life, generally reported that they were very happy there.

Photographs of the Holnicote House children were published in magazines and newspapers in Britain and America, including Life and the Daily Mirror. As a result, offers to adopt came from both sides of the Atlantic – Somerset received 85 offers of adoption from America and over 100 from people living in Britain. For reasons that are not entirely clear, few of the children nationally were adopted, especially the boys. There was a push by Somerset County Council’s Superintendent Health Visitor for a change in the 1948 Adoption Act to allow the children to emigrate to America for adoption there. This was debated over several years at the highest levels of Government, but in the end permission to send the Somerset children was refused. Nationally a small number of children did eventually emigrate to America. 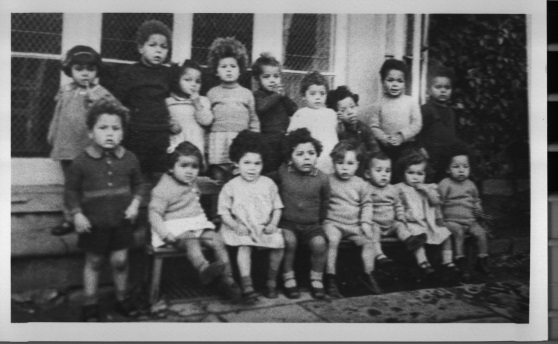 In researching her recent book, Britain’s Brown Babies, Professor Lucy Bland interviewed several children from Somerset and a few from Devon. The interviews are held at the Black Cultural Archives. She also spoke on Woman’s Hour in 2016 together with Dr Deborah Prior, one of the Somerset-born children. Lucy Bland’s book describes the later lives of some of her Somerset-born interviewees. One worked for the railway and won a Royal Humane Society award for bravery after saving a girl who was hanging on to a moving train. Another was the first black policeman in Somerset, and became Chairman of South Somerset District Council. A third obtained a PhD and became President of the Centaur Memorial Fund for Nurses.