The regimental archive of the Somerset Light Infantry, held at the Somerset Heritage Centre, contains two personal soldier diaries which record the Armistice. Both were written by regular soldiers with the 1st Battalion, who served throughout the duration of the war. 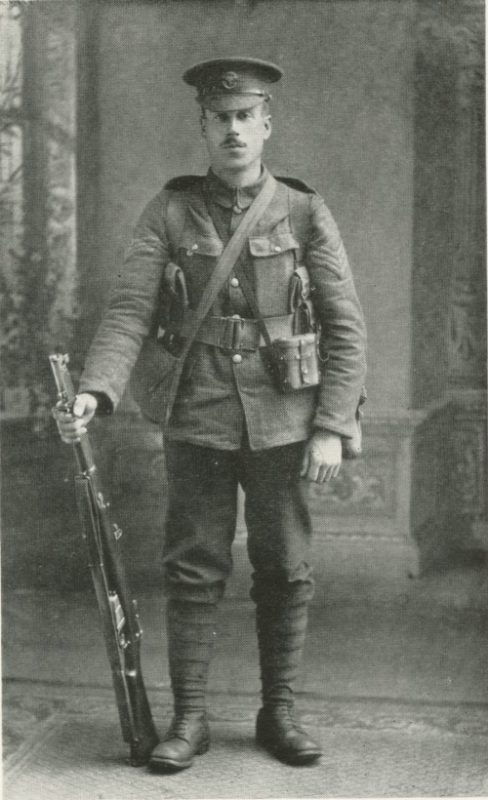 Arthur Henry Cook, who was born in Wiltshire and grew up in Yeovil, began the war as a Private and fought throughout with the 1st Battalion on the Western Front. His diary records the Battalion’s key actions, including the retreat from Mons, the digging of trenches in the winter of 1914 and the Christmas truce. He provides a detailed account of the first day of the Battle of the Somme on 1 July 1916.

On 2 November 1918 he was wounded by shrapnel. ‘It seemed as if a cart horse had kicked me in the knee, I looked down and saw that a large piece of splinter had hit the inside of my left knee.’ On 9 November he was moved from hospital in France and arrived in Southampton the following day.

He was there when the Armistice was declared and his diary entry for 11 November says:

‘Hospital routine went on much the same as usual until the electrifying news came through that the Jerries had asked after an armistice, I don’t know whether to be pleased or no over my circumstances, for I had been waiting for a nice blighty wound for years and now I have got it and landed nicely in Blighty they gone and stopped the blinking war.’ He then says ‘I feel very proud of my war record and shall look back on its memories as long as I live, remembering the many hundreds of pals left behind who were not so lucky as I was. One cannot help reflecting on this day and having a feeling of thankfulness that the slaughter of human beings is over.’

The diary also records the victory marches in Paris and London in July 1919 and the funeral of the Unknown Warrior on 11 November 1920. Arthur Cook eventually became a Yeoman Warder of the Tower of London and died in 1956.

Captain Owen Philby, from Leighland in Old Cleeve, was wounded during the retreat from Mons and became a prisoner of war on 27 August 1914. He spent the rest of the war in prison camps in Cambrai, Torgau, Burg and Magdeburg and his diary records his daily life there. Because of the difficulty Philby experienced in hiding his diary from the authorities, the entries become sparser after 1917.

He records the end of the war in these words: ‘When the Armistice came the interned prisoners for the most part were sent home as quickly as possible. Some were kept to clear up things, some told off to reception stations for the prisoners who were coming out of Germany and some for embarkation duties.’ He adds that he ‘came home…in a very small packet boat from The Hook to Gravesend two days before Xmas. Had a very rough crossing. Sent a wire on arrival to my mother who was in London, but such being the state of the telegraphs, I arrived up there before the wire, bursting rather unexpectedly on my astonished and gratified parent. Very glad to see England again after the past 3½ years. Looking back on it, it is difficult to know how the time was spend but it passed somehow. Some fellows, especially the older ones, were a bit broken up but I cannot say it affected me much except in my temper.’

Read more about where the Somerset Battalions were on Armistice Day