‘Operation Poppy’ last week saw a 197-million-year-old Ichthyosaur from Stolford delivered to the Somerset Heritage Centre ahead of conservation work. The specimen was successfully extracted on 27 December by experts working against the clock in the intertidal zone of Bridgwater Bay National Nature Reserve.

The prehistoric fossil was discovered by amateur fossil hunter Jon Gopsill when he was out walking his dogs on 14 December. The five-and-a-half foot long marine reptile had been exposed by recent storms. It has now been dubbed ‘Poppy’ after one of Jon’s dogs who helped make the discovery.

The rescue mission took place at the first opportunity allowed by the tides after the unexpected discovery was made. The fossil was at risk of being washed away by the strong seasonal tides. A team of geological specialists from Geckoella had a four-hour window within which they could extract the specimen from the Blue Lias rock. They used rock saws, hammers, chisels and crow bars to cut out a single block of stone containing the fossil. The block weighs about 160 kg and is 175 cm long, 85 cm wide and 9 cm deep. 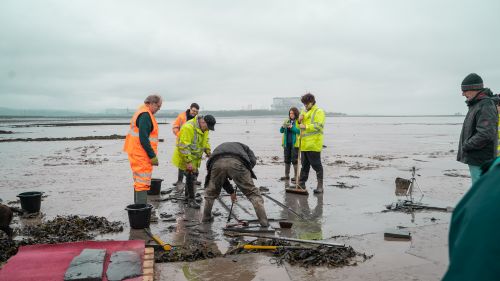 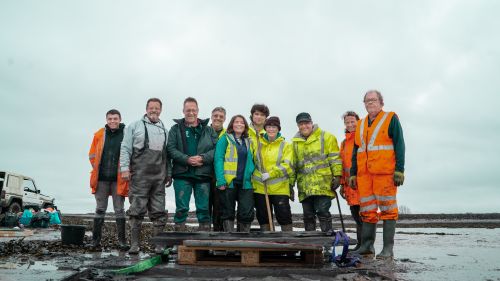 Bridgwater Bay National Nature Reserve is owned by the Environment Agency and managed by Natural England, who assisted with the excavation along with archaeologists from the South West Heritage Trust. They were joined by the finder Jon, together with his dogs Poppy and Sam.

Such Complete Specimens Are Relatively Rare

Dr Andy King, Co-Director and Palaeontologist with Geckoella, led the extraction. He said: “It was very exciting to have the chance to rescue such an impressive fossil ichthyosaur as ‘Poppy’. Given the tidal conditions at Stolford and very shaley nature of the rock, this particular extraction was certainly more challenging than others we’ve been involved with. Though the skull is not preserved, ‘Poppy’ is otherwise remarkably complete.

“It’s not uncommon to find pieces of fossil ichthyosaur ribs or vertebrae, but such complete specimens are relatively rare. Slightly older ichthyosaurs have been collected from West Somerset, but it’s still quite a feeling to realise that this marine reptile was swimming in the Jurassic seas covering Somerset nearly 200 million years ago at the same time that dinosaurs were walking around on the land and pterosaurs were flying in the skies.  We’re really delighted that this fossil was collected safely and responsibly, and that it will be preserved by the South West Heritage Trust.”

The Environment Agency transferred ownership of ‘Poppy’ to the Somerset Heritage Centre, near Taunton, on 17 January ahead of conservation work to be undertaken by the Heritage Trust.

Conservation In Preparation For Display

Sam Astill, Head of Museums from the Trust, said: “We’re grateful to Jon and our partners at Geckoella, Natural England and the Environment Agency for their collaboration in successfully rescuing this remarkable specimen. We will now undertake the conservation work required to preserve the fossil. This involves three basic steps – cleaning, including de-salination and drying, consolidation and stabilisation, to avoid splitting, and preparation for display. We look forward to displaying ‘Poppy’ at the Museum of Somerset where visitors can discover more about the county’s Jurassic past.”

David Evans, a geologist from Natural England, who assisted with the extraction said: “Natural England and the National Nature Reserve team were really pleased to be able to ensure that this valuable fossil and important piece of Somerset’s heritage was safely and responsibly extracted,  and will be going to the county museum to be conserved and then to be seen by the public.”

Jon Gopsill said: “I’ve been interested in fossils all my life. I started fossil hunting on Watchet beach when I was just six-years-old. The scale of this find, at 197-million-years-old, is incredible. When I saw it I thought, ‘I’ve been looking for this my whole life!’ 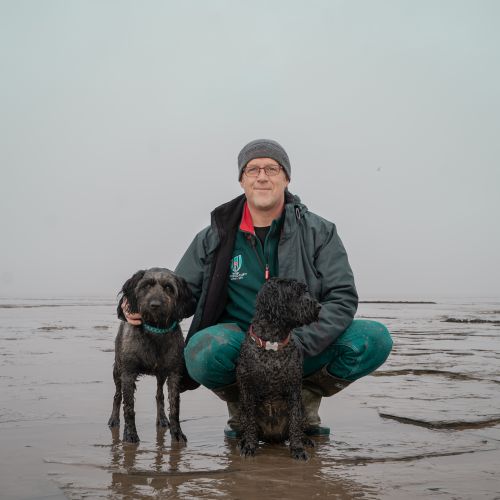 Jon Gopsill and Poppy and Sam

“The whole experience has been amazing. You see ichthyosaurs in museums and think they’re amazing, but to actually find a ‘wild’ one in it’s natural environment is totally mind blowing! Somerset is my home so I’m delighted that this specimen will be staying in the county for other people to enjoy.”