For Explore Your Archives we’re going behind-the-scenes with our conservator Rebecca to find out a little more about the project to conserve the political papers of former Prime Minister, Henry Addington 1st Viscount Sidmouth.

This nationally important collection held at the Devon Heritage Centre consist of around 9,000 items including letters written by George III, William Pitt the Younger, Horatio Nelson, the Prince Regent and William Wilberforce.

The King’s Friendship for Addington

The collection provides an invaluable insight into the internal workings of the government, as well as the personalities and relationships between important politicians and members of the Royal family. A letter written in May 1804 reveals the high regard the King had for Henry Addington. It was written after his resignation and immediately after the king had finished “a long but most satisfactory conversation with Mr Pitt” who would again take over the role of Prime Minister. The king requests that he attends the Queen’s Palace with the seals of the Chancellor of the Exchequer…

“The King’s friendship for Mr. Addington is too deeply graven on his heart to be in the least diminished by any change of situation: his Majesty will order the warrant to be prepared for the creating Mr. Addington Earl of Banbury, Viscount Wallingford, and Baron Reading; and will order the message to be carried by Mr. Yorke to the House of Commons for the usual annuity, having most honourably and ably filled the station of Speaker of the House of Commons. The King will settle such a pension on Mrs. Addington, whose virtue and modesty he admires, as Mr. Addington may choose to propose.  George R,”

The paper has split apart where it had been folded. As can be seen in the photograph the two separate pieces of this letter have now been joined together with a thin piece of fine Japanese tissue. 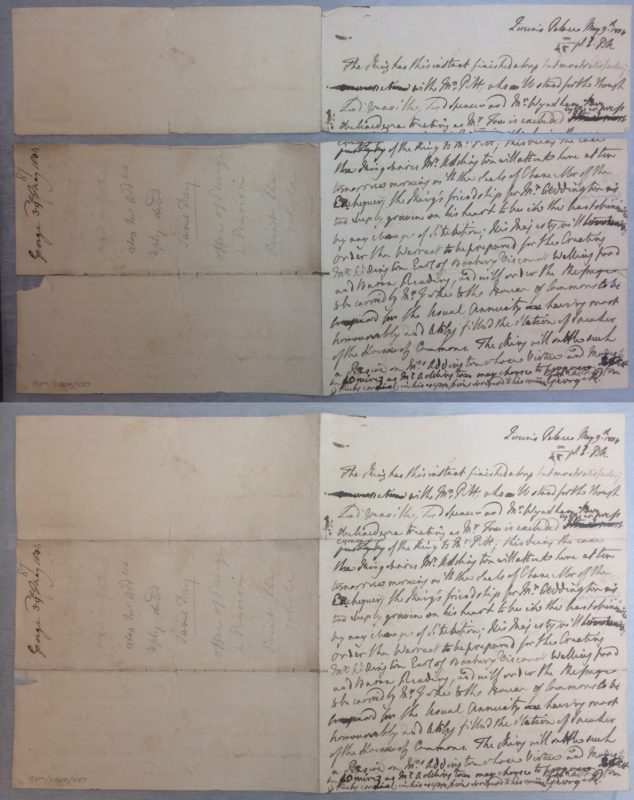 Before and after joining

Of the ten thousand letters of the Sidmouth collection, around two hundred have likely been stored in a damp environment in the past which has caused significant softening, thinning and loss of paper from mould growth.

The next letter described is by no means one of the worst examples found in the Sidmouth Collection, but treatment was necessary to stabilise paper fragments and uncover a line of writing. The Prince of Wales wrote the following to his brother the Duke of Kent (21 February 1804) upon receiving copies of confidential papers …

“I applaud the very honourable motives that you have acted upon, but as you fully observe, it is impossible for me as an honest man to set my name to any paper containing any matter which to me is not personally known. With respect to the other paper which likewise appears to me to have some reference to the specific declaration which you and the Duke of Cumberland have signed, besides my absence from the Queen’s House, as you also remark, it is for the reason I have above just stated, that it is equally impossible for me to affix my name to that paper, and the only observation I can make upon the contents of the first paper signed by you and the Duke of Cumberland, is that you have done most properly and discreetly in communicating the circumstance for the consideration of His Majesty’s Cabinet and His Physicians.

As for myself, I cannot nor would it be proper for me, to form any opinion as to the necessity, propriety or impropriety, of introducing the Doctors Willis, a Dr Symmonds, or any person on that professional line to My Father.

My earnest wish must ever be, that whatever is done, may be that, that is best and most conducive to The King’s safety, and the perfect establishment of His health, which as a dutiful and affectionate Son, and as a subject, I must so ardently wish and pray for.

I am ever, My dearest Edward, your most affectionate Friend and Brother, (signed) George P.” 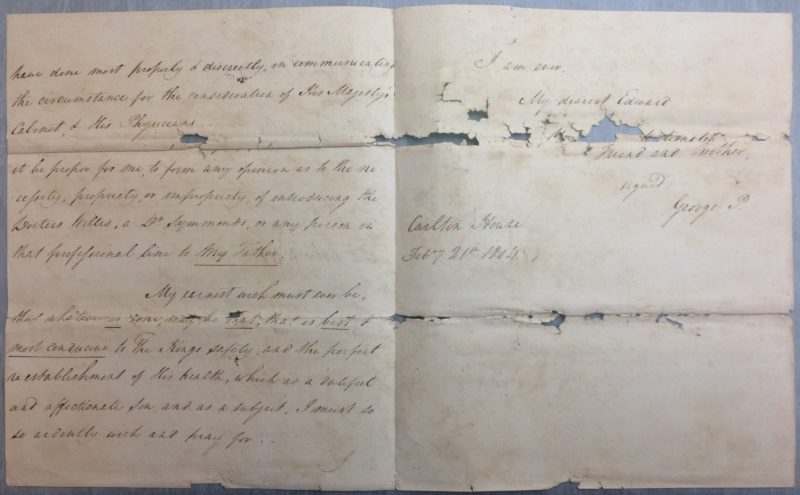 Before: the paper was very soft along the fold lines and some areas were folded over which obscured a line of the text 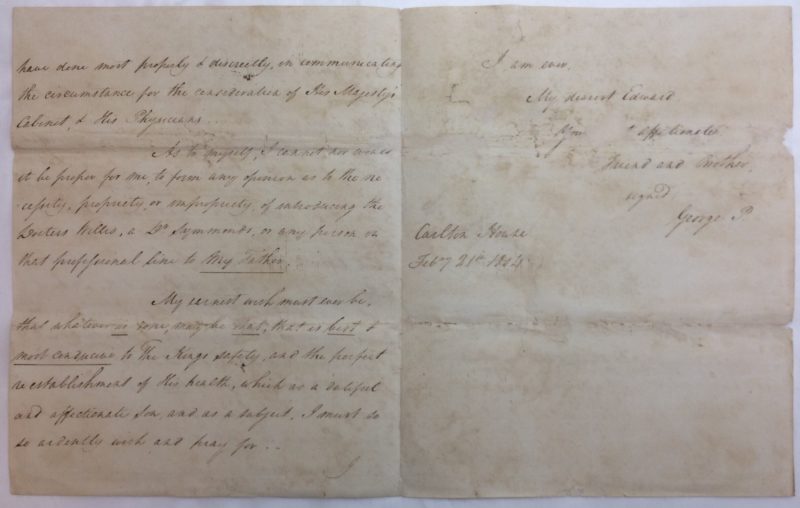 After: the folded area was dampened to relax it and then gently pressed under weights to flatten it before infilling the tears

The project has been made possible thanks to a grant from The National Manuscripts Conservation Trust and support from The Friends of Devon’s Archives.

If you’re interested in finding out more about the archives take a look at our special events for November’s Explore Your Archive.

The Explore Your Archive campaign is being delivered in partnership with The Archives & Records Association (UK and Ireland), The National Archives and local, business, university and private archives.