To mark the 200th anniversary of the Peterloo Massacre CEO of the South West Heritage Trust, Tom Mayberry, reveals the surprising connection to Somerset.

On 16 August 1819 the radical orator, Henry Hunt (1773–1835), whose family had deep roots in Somerset and Wiltshire, arrived at St Peter’s Fields in Manchester to address a crowd of at least 60,000 people. They had gathered to demand parliamentary reform.

The meeting was broken up by the local yeomanry who were seeking to arrest Hunt. But in the process at least 11 people were killed and more than 400 injured. ‘Peterloo’ immediately became a symbol of government repression and a rallying cry for radical reformers. 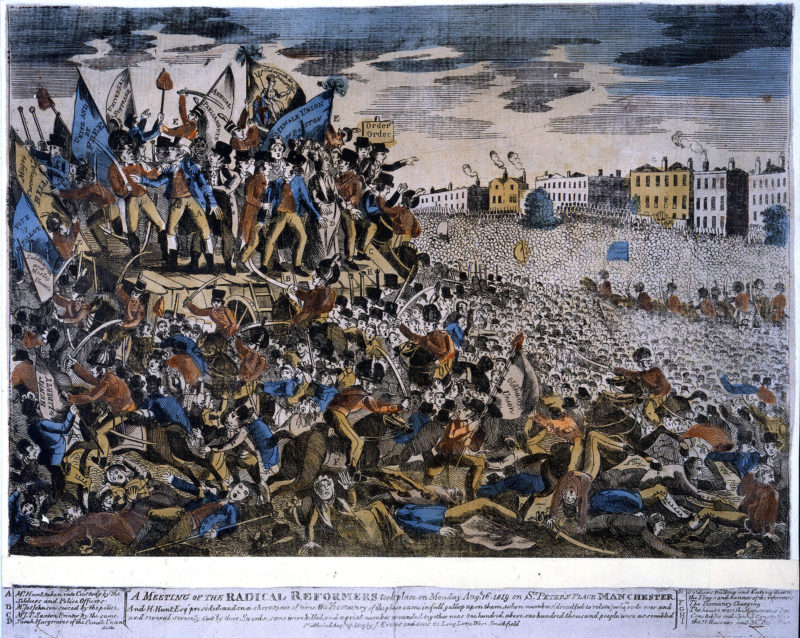 The connections with Somerset continue after the events in Manchester. Henry Hunt was convicted of ‘unlawful and seditious assembly’ and in May 1820 was sentenced to two and a half years imprisonment in Ilchester Gaol – ‘the worst, the most unwholesome, and the most infamous county gaol in the kingdom’.

Hunt, made it his task during his imprisonment to expose the cruelty of the prison regime. A Royal Commission was appointed and the ‘Ilchester Gaol Scandal’ led not only to the dismissal of the prison governor but to national reform.

When Hunt was set free on 30 October 1822 there was widespread celebration in Somerset, led by his old friends Oliver Hayward of Mudford and the firebrand vicar of Creech St Michael, Henry Cresswell. Finally, in 1843, Ilchester Gaol was closed and demolished. It was one outcome which the bombastic but good-hearted Henry Hunt could never have foreseen on that fateful day in St Peter’s Fields.

‘Somerset and Peterloo’, a talk by Tom Mayberry about Henry Hunt and his part in the Peterloo Massacre and the Ilchester Gaol Scandal, will take place at the Museum of Somerset on 18 September.

Somerset and Peterloo: A Talk by Tom Mayberry