Lewis Mills Burfitt (1894 – 1964) from Ilfracombe, provided a remarkable insight into his experiences in a prison camp in China during World War Two.

Lewis Burfitt and his diary

Life Prior to World War Two

Lewis Mills Burfitt was born in Ilfracombe in December 1894. He became a sailor, and in late 1914, during the early months of the First World War, the coal ship he was working on was captured by Germans. As a result he became a Prisoner of War for the first time, but not the last.

Between the wars Burfitt continued to go to sea, and by 1936 he was working in China. Despite the outbreak of the second Sino-Japanese War he remained there until, in 1943, he was interned with many other foreign nationals in a prison camp in Shandong Province.

Between March 1943 and March 1945 Burfitt recorded his experiences in remarkable detail in a diary which was one of two purchased at auction by the South West Heritage Trust in 2015 and which are now held by the North Devon Record Office. The diaries contain vivid reflections from Burfitt about his period in captivity, which lasted until the camp’s liberation in August 1945. 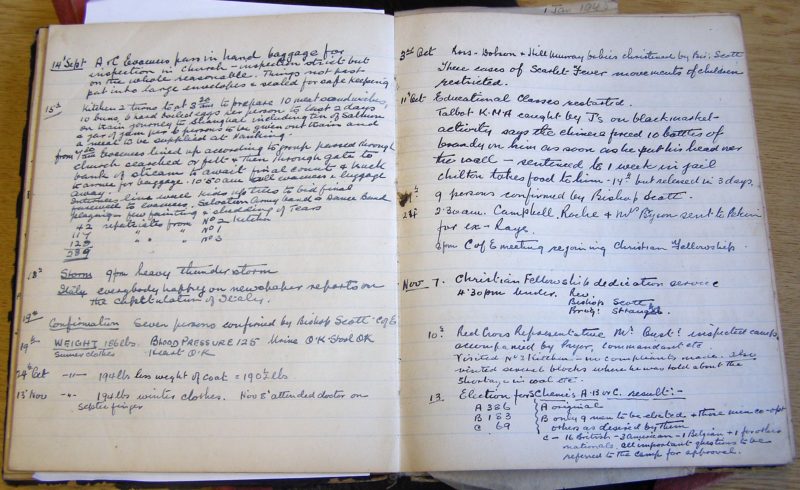 The camp was the largest in northern China, and was severely overcrowded. There were shortages of food, outbreaks of severe illness and a thriving black market.

Burfitt describes a society in microcosm, with elected committees established to run various aspects of the camp, but where extremes of weather and poor sanitation also contributed to the inmates’ hardships. Among Burfitt’s compatriots was Eric Liddell, the man immortalised in the film Chariots of Fire for his refusal to run on a Sunday at the 1924 Olympic Games.

After liberation Burfitt returned to North Devon but later worked in China for a further decade.

He died on the last day of 1964 and is buried in Ilfracombe. He left a unique and very personal archival record of his experiences during World War Two, which we are privileged to have.