William George Hoskins (1908 – 1992) is revered for his important role in the study of English local history. Born in Exeter, he attended schools in the city, followed by what was then University College Exeter.

Following a PhD thesis on land ownership in Devon and war service for the Board of Trade in London, he was appointed to a post at Leicester University in 1946 and then to the new Department of English Local History there in 1948. Following several early works on the history of the Midlands, Hoskins wrote his monumental history of Devon, published in 1954, for which he visited every parish in the county, travelling by bus, train or on foot. This was followed by the seminal The Making of the English Landscape (1955), Local History in England (1959), Devon and its People (1959), Two Thousand Years in Exeter (1960) and Fieldwork in Local History (1971). Between the 1950s and the 1970s he also developed a wider popular reputation as a result of his radio and television work for the BBC. 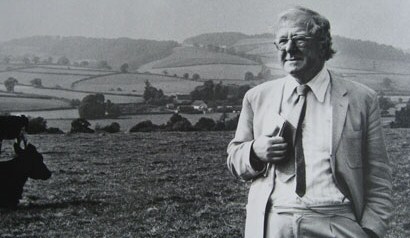 After a period in Oxford, Hoskins returned to Leicester University in 1965, but resigned in 1968 in order to spend more time on his research and less on university administration. After returning to Devon he served on Exeter City Council and, through the Exeter Civic Society, was involved in saving many threatened historic buildings from destruction. He died in January 1992.

A former member of staff of the Devon Record Office recalls seeing the older Hoskins – venerable and irascible – walking the streets of Exeter in his later years. It is a source of considerable pride to those involved in the study of archives and history in the county that someone often described as the ‘father’ of the study of English local history was born and raised in Devon, and wrote so well about it.