Like most of the country, Somerset people anticipated VE Day by decorating their streets with bunting, flags and streamers. On the day itself, as the local press reported, people dressed in the colours of the Union Jack and made rosettes and hats. In Bridgwater, the domed roof of the Market House was painted red, white and blue, and an illuminated portcullis star was put up on the Town Hall in Langport. When darkness fell, the skies above Cannington were illuminated by Verey lights sent up by the RAF and bonfires were lit in many places. In Evercreech the children were so keen to have a bonfire that they gathered material for it themselves. 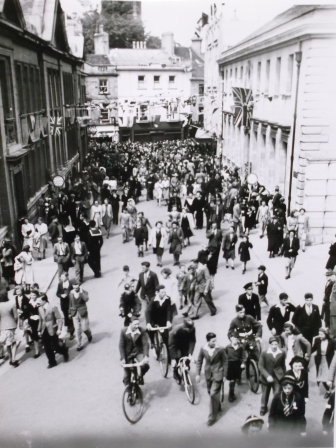 The crowds gather in Yeovil 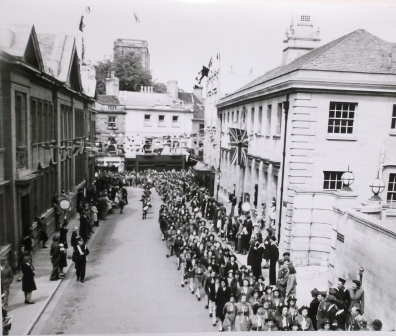 Processing through the town

Celebrations, spontaneous or planned, took place in Somerset towns and villages from Monday night until Wednesday and beyond. Dancing and community singing were enlivened by instruments where possible. Pianos were brought into the streets and accordions provided, and in Ilminster a loudspeaker was set up in an office window. The Glastonbury crowd was so great at the Town Hall that dancers overflowed into the Market Place. Bells rang out in Wiveliscombe from 8.00 am and Hancock’s cider factory opened for a variety concert in the evening. A whist drive was held at Lydeard St Lawrence following sporting events and tea for the children. Sports at Baltonsborough included skittles, darts, and a tug-of-war. Church services were held on Tuesday and Wednesday, and processions arranged for the following Sunday.

Events mostly passed off without incident, although a practice incendiary bomb was accidentally kicked through the window of Lloyd’s Bank in Ilminster and the temporary stage at Bridgwater partially collapsed. Thankfully there were no serious injuries.

In Taunton the crowd fell silent at 3.00 pm to hear Churchill speak. His official announcement was relayed across Caste Green in Taunton accompanied by the sound of whistles from local GWR engines. There was a further pause in festivities at 9.00 pm to hear the King speak, but then the celebrations continued into the night.

Although joy and relief were tangible, there was an awareness too of loss, hardship and the continuing fight with Japan. Black-out times for the areas around the Somerset coast were still being advertised on the same pages as descriptions of the celebrations.

“There is great comfort in the thought that the years of darkness and danger in which the children of our country have grown up are over and, please God, forever. We shall have failed and the blood of our dearest will have flowed in vain if the victory which they died to win does not lead to a lasting peace, founded on justice and good will.

To that, then, let us turn our thoughts on this day of just triumph and proud sorrow, and then take up our work again, resolved as a people to do nothing unworthy of those who died for us, and to make the world such a world as they would have desired for their children and for ours.”