Born in March 1869 at Cleeve, near Ermington, Mary Willcocks has been characterised as ‘Devon’s forgotten feminist’.

She was educated at Plymouth High School for Girls and took a London University degree by correspondence, before teaching English literature in Edinburgh and Leamington Spa.

Soon after her first novel, Widdicombe, was published in 1905, she moved to Exeter, earning her living by lecturing, literary criticism and writing romantic novels with female heroines. 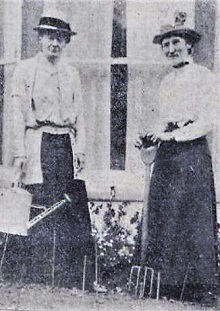 She had supported women’s suffrage since the 1890s, and it seems likely that she was the ‘authoress of high repute’ who was one of the Exeter banner bearers for the Women’s Social and Political Union rally in Hyde Park in June 1908. She joined the Exeter branch of the National Union of Women’s Suffrage Societies when it was formed in 1909, appearing on the platform at public meetings and being elected to the committee. She took part in the Suffrage demonstration in London in June 1909 and in 1911 took on the post of Secretary of the newly-formed South West Federation of Suffrage Societies.

Other Political and Charitable Activities

She later joined the Labour Party, standing unsuccessfully for Exeter City Council in November 1918. During the First World War she was a member of Exeter’s Unemployment Relief Committee and ran the Exeter Toy Factory, an initiative to provide employment for young women made redundant in the early months of the war.

Willcocks took a leading role in promoting the Workers’ Educational Association in Exeter, and was a founder member of the Exeter branch of the Save the Children Fund. She continued to write and speak, though after the early 1920s her talks were on literary and cultural topics rather than political ones and her writings became biographies rather than novels.