Bring your low-backed chairs and your picnic and enjoy this popular re-telling of The Canterbury Tales.

GreenMatthews are firm believers in the age-old power of narrative song to delight contemporary audiences. Taking their cue from ancient troubadour tradition, they are 21st-century wandering players – touring their self-created shows extensively throughout the UK and Europe. Although their music and tales are rooted in the past, the performance is entirely of the 21st century, immediate and accessible to modern audiences.Chris Green and Sophie Matthews are modern-day balladeers, specialising in telling stories through song.

Written in the late 14th century, ‘The Canterbury Tales‘ is the high-water mark of medieval English literature. Based around the concept of a disparate group of pilgrims to the shrine of Thomas à Becket at Canterbury Cathedral who tell each other stories to while away the journey, it paints a rich and vibrant portrait of life in medieval England. All human life is present – from the dark and brooding Pardoner’s Tale to the bawdy Miller’s Tale, via the proto-feminism of the Wife of Bath’s Tale and the simple whimsy of the Nun’s Priest’s Tale. Although Chaucer wrote his masterwork over 600 years ago, it still feels contemporary, fresh and vital – and wholly accessible to modern audiences. 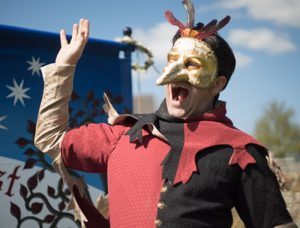 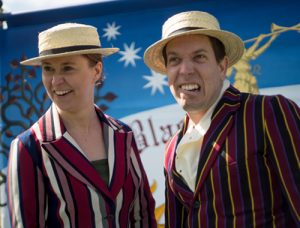 GreenMatthews present six of the best-loved tales, told in a variety of styles. Taking visual inspiration from medieval mystery plays and complete with a touring set which has been specially constructed to resemble a medieval travelling theatre, the three-man cast use drama, storytelling and song to paint a sumptuous picture of life in the Middle Ages, packed with colourful characters, strange situations and laughs a-plenty!

Suitable for ages 10+, GreenMatthews do not allow entry for under 5s. No filming allowed.

Yoga and Art at the Museum