While collections of records originating from community sports clubs have traditionally formed part of the holdings of county archive services, work undertaken over recent years by the Devon Archives and Local Studies Service has led to the establishment of a valuable and innovative relationship with Exeter City FC, the only English Football League club based in the area which we cover.

Over recent years, the club (which is owned by a Supporters’ Trust), in partnership with Exeter University, has received three lottery grants, which have enabled it to celebrate the club’s heritage in a range of ways, including collecting archives and artefacts, making films, erecting heritage displays and opening a fully accredited museum at the club’s ground, St. James’s Park.

Collections within the archives

The archive service has become involved in two major ways.  Firstly, we have added two significant deposits of the club’s records to our holdings.  The first of these, which came in in 2016, contained a range of administrative records charting the club’s history from its foundation in 1901. The second deposit, received in 2018, mainly consisted of papers relating to the extensive redevelopment work which took place at St. James’s Park between 2016 and 2018.

However, the Devon Heritage Centre also holds an even bigger collection of material, known as the Dave Fisher Collection.  Dave Fisher was a lifelong supporter of the club, whose vast collection of programmes, books, magazines and photographs was passed to the library after his death in 2002. Over the last few years, student volunteers from Exeter University have digitised many of the older photographs in the collection. We have delivered a number of training sessions – in both cataloguing and conservation – for these volunteers. 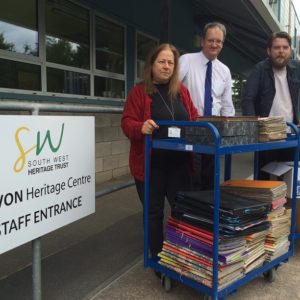 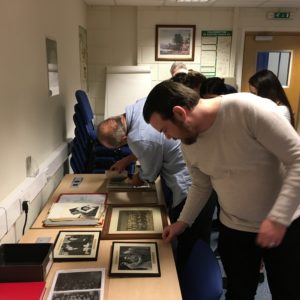 Awareness of the value of sports heritage is now greater than it has ever been, with the welcome result that more and more archives and artefacts relating to sports clubs and organisations are being preserved and passed to archives and museums.  The Devon Heritage Centre holds the archives of the Devon Rugby Football Union and the Devon Cricket League, and, in 2019, we took in a large collection of photographs from the Exeter Chiefs, one of Britain’s leading professional rugby clubs.  Conservation of these has taken place, and cataloguing will begin soon.  We hope to establish a similar relationship with the Chiefs as we have with Exeter City, and are working with representatives of both clubs to develop this.

Sport, like many other areas of national and international life, is currently on hold as a result of the Covid-19 pandemic, but, when it resumes, we hope to be at the forefront of celebrating a heritage which is likely to be even more deeply valued and appreciated than ever before.

Devon in the 1920sa research collaboration